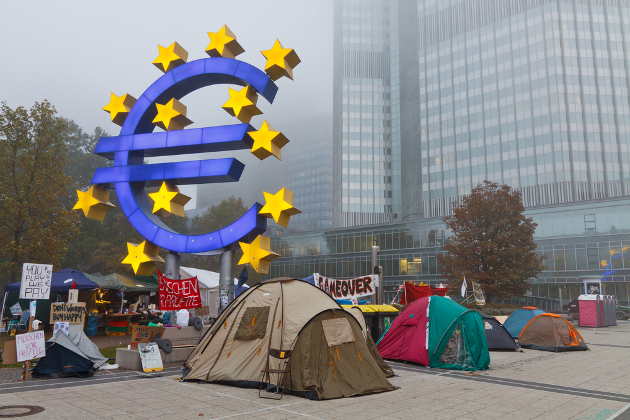 The protest camp of the Occupy Frankfurt movement at the European Central Bank in Frankfurt, Germany, on October 21, 2011. Photograph: Patrick Poendl/shutterstock.com.

The ongoing economic and financial crisis in the eurozone has led to severe social and political consequences which have shaken the European Union to its very foundations. Given the high degree of controversy in debates about the euro crisis, an important question to ask is what do students across Europe learn about the origins and consequences of the crisis?

In the new CIVES-Praxistest #4 Till van Treeck and Philipp Kortendiek argue that students in France and Germany, Europe’s most populous countries, are likely to be confronted with rather different perspectives on the crisis at high-school level. They review a number of important, though certainly not representative, teaching materials used in France and Germany.

The materials recommended by the French National Ministry of Education are mostly based on Keynesian perspectives on the crisis whereas the German teaching units largely represent neoclassical perspectives.

Clearly, the discrepancy between the ways in which the euro crisis is presented in the teaching materials in the European Union’s two largest member countries seems to be at odds with the EU’s objective to promote international dialogue especially within the young generation. Is this how Europe wants to educate its citizens and its future voters and leaders?